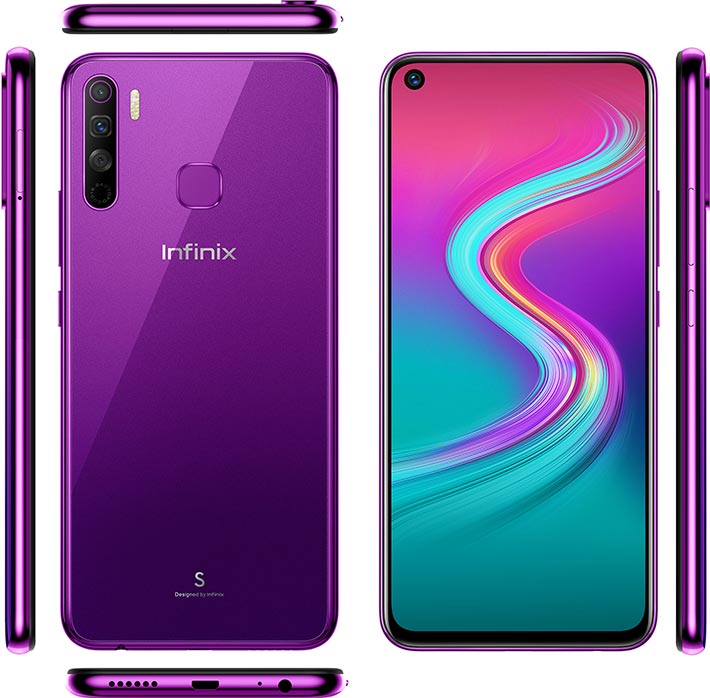 Infinix S5 Lite is coming to Market with its Awesome Specifications of 4 GB RAM, 64GB internal Space, 16MP Camera, and 4000 Huge Battery. Similarly, The Price of Infinix s5 Lite is 20,000 Rs in Pakistan. Other Important Features and Specifications Please Scroll Down.

Infinix has released its new S5 Lite has Punch Hole pattern and is filled with powerful features. in addition,  This Smartphone has already started in India, last month and now the company is making Infinix S5 Lite way for the Pakistani market. It has become a charming and slim design that will attract the customer. Inside the veins of this newest Infinix’s S5 Lite is Helio P22 chipset that is approved by Octa Processor. It has 4GB of RAM and up to 64GB of internal storage and is compatible with expandable storage of up to 128 GB through the microSD card slot.

Infinix S5 has a widescreen of 6.6-inches with a resolution provided with 1600 x 720 pixels. Powered by 4000mAh battery the handset also supports Xchange quick charging technology that charges S5 Lite by Infinix In very less time. So all in all its a lightweight variant of the S5 smartphone.

In this litter version the company only renewed its Four-camera setup with a simpler triple (wide-angle lens setup. Infinix Lite triple rear cameras setup has 16 MP + 2 MP + QVGA sensors. On the front side, you will get a 16 MP shooter Instead of 32 Mega-pixel shooters. Infinix S5’s Lite has the latest XOS 5.5 based on Android 9 Pie which will run all the applications smoothly. This smartphone will be available in black, purple, and green colors. Infinix S 5 Lite will also come in less RAM and less internal storage but other Specifications will remain the same. The Chinese giant always brings something new like the S5 Lite’s so that they can give a tough time to the Korean giants Samsung.

The Infinix S5 Lite has a big 6.6-inch display and deserves a 90.5 screen to body ratio. The Infinix S5 has a hole-punch display and a 20:9 perspective ratio. It is a double SIM device with two nano-SIM slots. Infinix offers the smartphone in three color options: Midnight Black, Quetzal Cyan, and Violet.

Above all, The S5 Lite is powered by a MediaTek Helio P22 SoC and has 4GB RAM and 64GB storage. It runs XOS Cheetah 5.5 operating on top of Android 9 Pie. The review is average but the processor is very effective which helps the device offer good battery life.

infinix s5 Lite Price in Pakistan. 19,999. This is for the base variant that comes with 4GB of RAM and 64GB of internal memory.